AISIN companies have a long history of being good neighbors and responding locally and globally to needs in the community. Our company has long recognized that coexistence with local communities is an integral part of who we are as a company and how we’re viewed as a corporate citizen.

Around the world, AISIN companies routinely demonstrate that living in harmony with the community is more than a statement; it’s a value which brings a positive impact on human lives and the environment. In the Americas, for example, whether participating in reforestation projects; donating and installing handicap-accessible children’s playground equipment; or rescuing endangered turtle eggs, AISIN team members are quick to volunteer. “How can I help?” a common refrain.

AISIN Canada, Inc. (ACI) has set a good example of Corporate Social Responsibility programs in North America and is frequently recognized for its contributions to the community in Stratford, Ontario. In 2021, ACI was presented with two notable achievements: “Business Excellence” and “Business of the Year” awards by the Stratford Chamber of Commerce. Both awards recognize strong ethics, integrity and excellence in customer service.

Established in 2002, and currently the only AISIN plant in Canada, ACI manufactures a range of quality products for Toyota and Lexus models such as sunroofs, doorframes, moldings and seating. 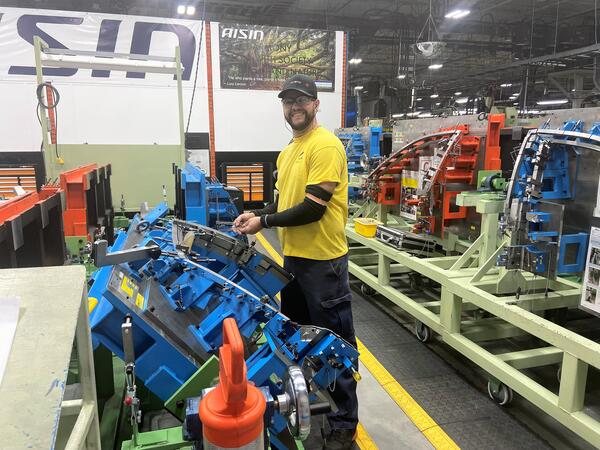 ACI President Wayne Robert says the company has always been known as a good neighbor – one of the reasons he joined AISIN nearly 20 years ago.
“The thing that drew me into the company was this mindset to move into the future, a better future,” says Robert. “This ‘value’ of making things better around us… of respecting and protecting the environment, and ‘living in harmony with society and nature,’ – this is why I came to AISIN.”

Robert eagerly shares his enthusiasm and community commitment with ACI team members, who are also determined to lend a hand when the opportunity to help exists.

In October, 2021, ACI aligned itself with the Upper Thames River Conservation Authority (UTRCA), established to help safeguard waterways and protect, manage and restore woodlands, wetlands and natural habitats of wildlife.

Together, with students from a local high school’s “Green Initiatives Class,” their first activity was a tree planting effort to improve biodiversity. In all, 501 trees were planted to help with the reforestation of an area devastated by the highly destructive Emerald Ash Borer, an insect that feeds on and destroys ash trees – in some cases entire forests. Each tree planted was in honor of each of the 500 ACI team members. The 501st tree, a single Ginkgo Biloba, was planted and dedicated to the Stratford community by Robert and participating students.

Robert says it was inspiring to watch the children watch their parents set examples of good citizenship. “It was nice to have all the team members and their families together again,” says Robert. “It was fun… kids were laughing, lots of smiles, lots of mud!

“But there’s a serious reason that we do this and it’s not just because we like the fresh air and getting our feet wet,” he adds. “ACI members really care about the environment, and they know their actions can make a difference. And lately, with signs of climate change all over the world – they’re concerned.”

From the forest to the River

Next, Robert and ACI took the new partnership with the conservation group in a different direction. This time, away from the trees and forest and into the wetlands and riverbeds: off to save the turtles!

In June, ACI joined with the UTRCA to help with recovery efforts of the largest remaining population of the endangered Spiny Softshell Turtle. The UTRCA, which has extensive nest protection and habitat creation experience, has helped to slow the decline of this species along the Thames River, creating new hope for its survival in Canada. Their work has evolved into an internationally recognized conservation program for a wide range of endangered and threatened reptiles, and is headed by Scott Gillingwater, species-at-risk biologist. 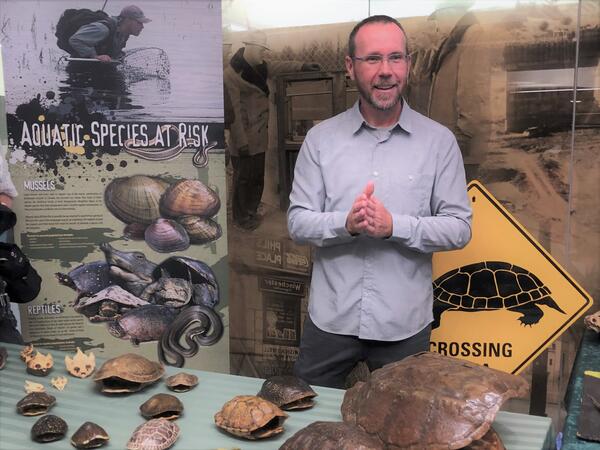 Due to cuts in government funding, Gillingwater and the group recently launched a fundraising effort to help build a stable, long-term cash reserve for its wildlife recovery program by partnering with local business. ACI immediately stepped up. To start, ACI hosted the UTRCA so Gillingwater could share information about endangered reptiles in Ontario, specifically the Spiny Softshell Turtle. Team members fully appreciated the important work of the UTCRA, and ACI made an initial $5,000 donation to the effort.

But there’s much more than just writing a check. Robert and his team knew that by personally taking action, they could help make an impact. So, at the invitation of the UTRCA, Robert and a small group that included UTRCA staff and an ACI team member, embarked on a six-hour canoe trip up the Thames River to an undisclosed breeding location for Spiny Softshell turtles. The goal was to recover turtle eggs to then be brought to the UTRCA incubation center for hatching and then release at the appropriate time back in the same secret location where they were found.

Next, a second trip was organized and took place in September, and included Robert, along with three ACI team members, who were selected as part of a contest to participate in the program and help deliver the special cargo. In all, approximately 250 baby turtles were returned to native breeding grounds that are protected from the threat of human interaction, farming and pollution. Standing up for Wildlife

The importance of preserving endangered species like the Spiny Softshell cannot be overstated, says the UTRCA’s Gillingwater. But it’s not without a lot of hard work, and ultimately, the work can’t be done without volunteers.

“By partnering with local businesses and individuals, we can ensure long-term stability in our efforts to recover some of the most at-risk species in this region,” he says. “Together we can protect declining wildlife, educate and inspire communities and safeguard our local environment into the future."

Gillingwater says the next 10 years are critical for these species, especially since government funding has become unpredictable or not available.

“It’s through corporate funders such as AISIN that this important work can be realized, allowing us to take necessary steps toward the long-term survival of populations locally, nationally and internationally,” says Gillingwater. “AISIN has shown its care and concern for the Spiny Softshell Turtle by supporting these recovery efforts in Canada. When a large company stands up for wildlife, it can influence others to do the same.” Robert, a bit philosophical, says the recovery effort is a symbolic reminder of what society has done, and what it now must do to preserve the future.

“To me, this is the most important thing to remember,” he says, thoughtfully. “For years and years, we’ve been taking from the earth. There’s a point where we have to stop and realize what we’ve done and recognize the things we’ve damaged. This activity helps to repair and replenish the ecosystem.